Also the Control Authority was elected: Mechtild Hörster, GER (President of the CA), Riina Kirber (Member of the CA).

Here are the participants of the General Assembly from Belgium, Germany, Estonia, Japan, Korea, Luxemburg, Poland and Switzerland.

Tokio Oshizuka, one of the founder of the IIA and Vicepresident sind the year 2000 was awarded as honorary member and received the medal of merit in gold, als well as Takayoshi Seto as member of the Technical Committee in the same time.

Here you can see the new honorary members of the IIA together with the President Karlheinz Bührer. 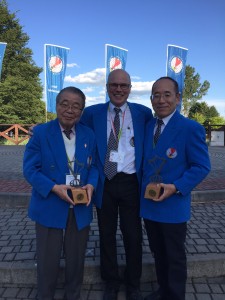