After a period of 11 years, Luc Hagen (Luxemburg) has stopped to carry out his work for the International Indiaca Association. Luc Hagen started as member of Technical Committee in 2004 and became President of Technical Committee in 2008. The IIA thanks Luc Hagen for his effort that he put into his function in all these years and appoints him to honorary member of the IIA. The IIA wishes him all the best for the future.

An other election that was done in the General Assembly, was the election of a new member of TC. The decision was in favor of Einar Piir, also from Estonia, who the IIA warmly welcomes in the committee. 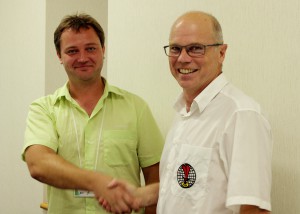